Banner Ads Have 99 Problems And A Click Ain’t One

If content marketing is the hero of the modern marketing story, then banner ads are most certainly the villain. Banner ad click through rates have fallen to less than 0.1%.

If #contentmarketing is the hero of modern marketing, then banner ads are the villain. Click To Tweet

This and the title of this post have become one of my favorite content marketing quotes because they demonstrate one of the biggest challenges with marketing today: Marketing that doesn’t deliver real results.

But clicks aren’t the only problem that banners face. Here are some of the deeper issues facing banner ads:

All these issues have caused almost all of us to completely ignore ads on the side, or above, or below, or on top of, the content we are trying to view.

This is the first banner ad from way back in 1994:

This banner ad saw a 44% click through rate and sent traffic to a series of AT&T ads narrated by Tom Selleck, that promised a future where you could read books, get directions, send faxes, pay tools, buy stuff, watch movies, and attended meetings – all online? Whoa!!! 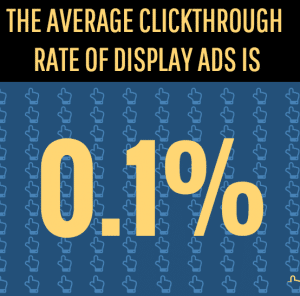 Banners have suffered a bit since then.

The number of people who can access the web has grown from 30 Million in 1994 to more than 7 Billion. That’s 50% of every single person on the planet (including babies) according to Internet World Stats.

And so the number of banners ads we’ve served all these web visitors has grown as well. The banner ad display format is expected to grow 7% this year to more than $44 Billion, despite the crazy insane lack of effectiveness.

Marketers are blindly shifting their ad budgets into digital ad formats that are seeing lower and lower response rates.

Content marketing seeks to earn an audience vs. buying it.

And when you create content that people actually want, content that actually helps them, then you build a relationship based on trust.

And trust is what ultimately drives conversion to real sales, real customers, and real business value.

But if you need more stats, here I’ve compiled dozens of stats to support the notion that banners have 99 problems but a click ain’t one. (These images were created with graphic design software Venngage.) 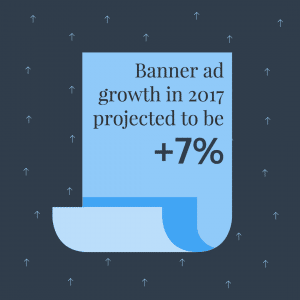 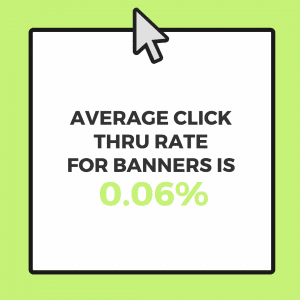 3. Ooops – As many as 60% of clicks on banner ads are accidental (Media Week) 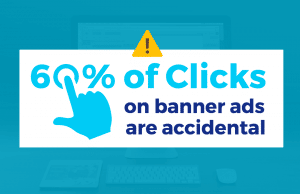 4. Only 9% of Digital Ads are viewed more than 1 second (MarketingWeek) 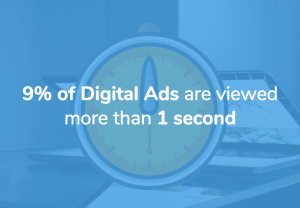 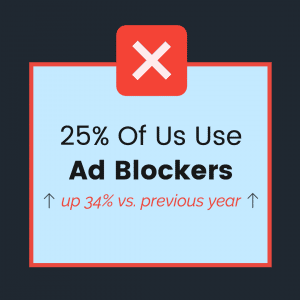 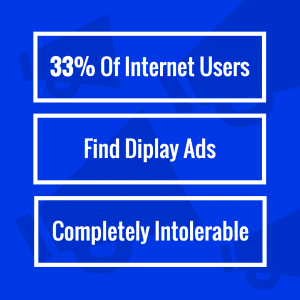 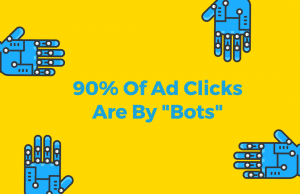 90% of the clicks on banner ads are from bots not by humans. https://marketinginsidergroup.com/content-marketing/banners-99-problems/ Click To Tweet
8. We are served more than 1,700 banner ads per month (Comscore) 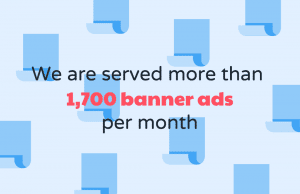 9. Once a digital banner ad reaches the same person 40 times or more in a month, sales can actually decline (The Advertising Research Foundation) 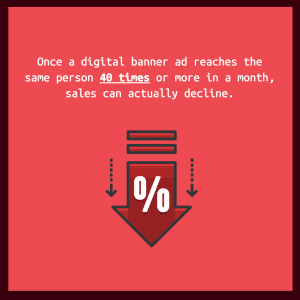 Once a banner ad is viewed 40 times, sales of that product start to decline. https://marketinginsidergroup.com/content-marketing/banners-99-problems/ Click To Tweet

10. You are more likely to survive a plane crash of win the lottery than have someone click on your banner ad (Business Insider) 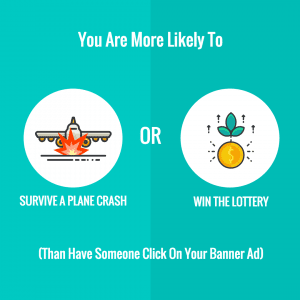 11. 28% of marketers have reduced their ad budgets and shifted to other forms of marketing (Gartner)

12. 54% of internet users have never clicked a banner ad because they don’t trust them. (BannerSnack)

15. 8 percent of Internet users account for 85 percent of clicks. (ComScore)

17. You are more likely to birth twins than click a banner ad. (Solve Media)

18. You are more likely to complete NAVY SEAL training than click a banner ad. (Solve Media)

19. You are more likely to get a full house while playing poker than click on a banner ad.(Solve Media)

20. You are more likely to summit Mount Everest than click a banner ad. (Solve Media)

21. You are more likely to get into MIT than click a banner ad. (Solve Media)

23. Just 22% of consumers trust emails from companies or brands. (MediaPost)

32. 20% said they trust emails from brands or companies. (MediaPost)

33. 18% said they trust posts by brands or companies on social sites. (MediaPost)

34. Consumers trusted the messages in text message ads the least at 12%. (MediaPost)

38. The U.S. accounts for a quarter of global online display impressions. (DoubleClick)

41. Being seen matters more than being clicked. Clicks on banner ads have the lowest correlation with conversion. (ComScore)

42. The Internet accounts for 26 percent of U.S. consumer interaction with media, and 22 percent of advertising spending. (Mary Meeker)

46. An estimated 50% of ad impressions can’t be viewed by users. (Comscore)

51. 70% of individuals want to learn about products through content rather than through traditional advertising. (Inc.com)

56. According to me, every pre-roll video ad made me hate the advertiser

OK, that’s not 99 problems. But I think 56 problems is enough! What do you think? Should banners be put to rest?

Michael Brenner  is a Top CMO, Content Marketing and Digital Marketing Influencer, an international keynote speaker, author of "Mean People Suck" and "The Content Formula" and he is the CEO and Founder of Marketing Insider Group, a leading Content Marketing Agency . He has worked in leadership positions in sales and marketing for global brands like SAP and Nielsen, as well as for thriving startups. Today, Michael helps build successful content marketing programs for leading brands and startups alike. Subscribe here for regular updates.

Send this to a friend